Ani Molnár Gallery, established in 2008, developed a high international profile early on and is one of the most active galleries in Budapest. Its emphasis is placed on the local and international representation of Hungarian and foreign artists, mainly from the CEE region, and artists of Hungarian origin who live and work abroad. The gallery predominantly works with well-established artists from the region, but also considers its mission to support the career of emerging talents of younger generations.

The aim of the gallery’s professional programme is to provide a platform for contemporary art trends through exhibitions, art fairs, institutional collaborations and contacts with collectors. The artists represented work both within the traditional field of painting and create conceptual works based on photography, installation or video, without restrictions in terms of content, genre or medium. The gallery devotes special attention to the presentation of representatives of geometric and lyrical abstraction from various generations. In addition to exploring the possibilities of new geometry and new media phenomena, there is an emphasis on the representation of works that problematise current social, cultural and artistic issues, both locally and internationally.

The gallery’s artists regularly exhibit on major international art events, including the Venice Biennale, Biennials of Sao Paolo, Liverpool, Turku, Bucharest, Moscow, Lyon, the Manifesta and Ars Electronica. Their works can be found in prestigious private and public collections in Hungary and abroad, including the MoMA in New York, the Getty Museum in Los Angeles, the Pompidou Centre in Paris, MUSAC and MACBA in Spain, KUMU in Estonia, the Hungarian National Gallery and the Ludwig Museum, as well as in public spaces.

Ani Molnár Gallery  has become a significant venue in the visual arts scene with its bimonthly solo and group exhibitions, sometimes with invited artists, based on a curatorial concept. It also aims to promote contemporary art to a wider audience by organising exhibitions in external venues. Its most well-known non-profit project, the Park Gallery in the MOM Park shopping centre, from 2007 to 2014, showcased site-specific installations and sculptures by major Hungarian contemporary artists, thanks to the curatorial and organisational work of Ani Molnár. In 2009 the project was awarded the Summa Artium Prize in the Project of the Year category.

From the very beginning, Ani Molnár Gallery has aimed to integrate into the international art scene, since one of the primary goals of the gallery is the international representation and discovery of the Hungarian contemporary art. Hence, the gallery has been very active at international art fairs from 2010 onwards. Since 2011 the gallery regularly participates on VIENNAFAIR, renamed as viennacontemporary, on LOOP Barcelona and since 2012 on Artissima in Turin as the first Hungarian gallery. Ani Molnár Gallery was also the first Hungarian gallery to partake on the Armony Show in New York in 2014 and 2015. In 2021 it is the gallery’s fourth time to exhibit on ARCOmadrid and on LOOP Barcelona, in 2022 will be its seventh participation on Art Brussels.

In 2013 Ani Molnár Gallery was the first Eastern European gallery to receive the F.E.A.G.A. Innovation and Creativity Award in Basel. At Artissima 2017, presented by Ani Molnár Gallery, Sári Ember’s installation won the Campari Award for young artists, which provided the artist with the opportunity of a solo exhibition at Galleria Campari in Milan. In 2018 the video entitled ‘Venom’ by Péter Forgács received the Acquisition Award 2018 at LOOP Barcelona and thus was included in the LOOP collection of the Museum of Contemporary Art of Barcelona (MACBA). In 2019 Sári Ember received the Leopold Bloom Art Award. Already five artists represented Hungary, and four artists represented other countries at the Venice Biennale from of Ani Molnár Gallery’s roster.

The gallery’s owner and director, Annamária Molnár was the president of the Association of Contemporary Galleries between 2011 and 2014, and a member of the Talking Galleries advisory committee between 2014 and 2016. Since 2017, she has been a board member of F.E.A.G.A., where she has been dealing with the current issues of the international contemporary art scene, with a special focus on the Central and Eastern European region. The gallery has been a member of the IGA – International Galleries Alliance since 2021. 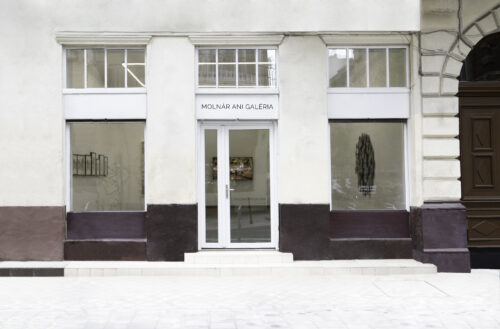